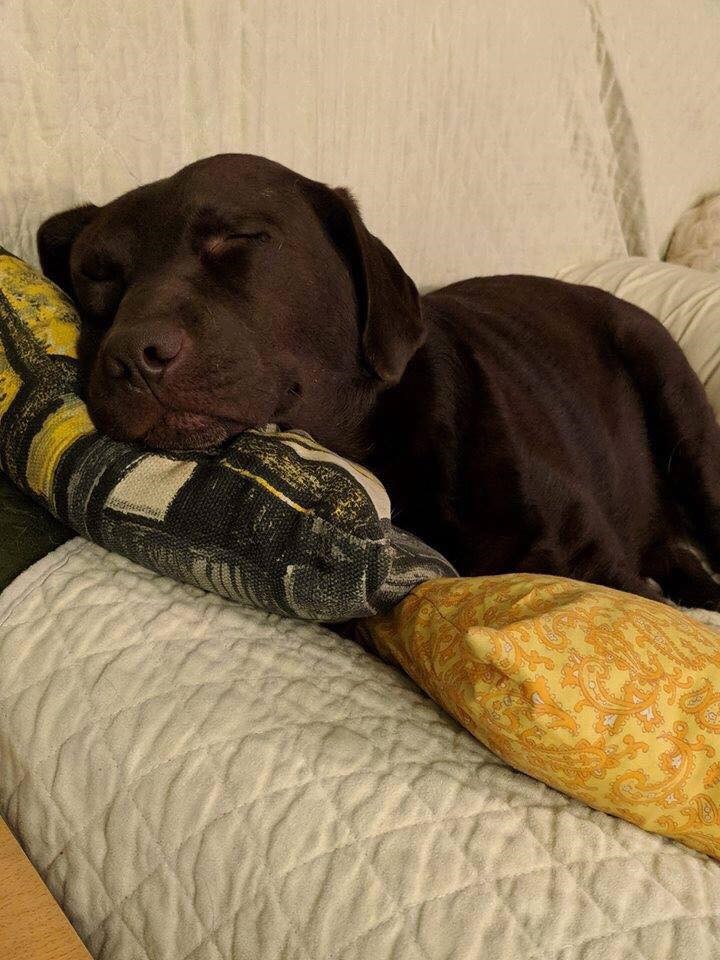 Blondie, Kona and Faith were all rescued from the kill shelter in Bosnia and Lindy was rescued from the streets of Bosnia before Fetcher Dog took over her care. Faith was shutting down in the kill shelter and needed to be taken into our Bosnian kennels for additional care and attention. She came to the U.K. kennels in May 2018 and soon went into foster with Nick Lawrence.

I was looking to home a rescue dog, specifically a Labrador as it had been several years since my beloved Lab Poppy had passed over the Rainbow Bridge. Looking online, I found a link for Blondie. Little did I know that less than 12 months later I would have 4 rescue dogs sharing my home.

Blondie, arrived in July 2017 and after nearly 2 years is mostly the same dog as arrived. She is a super cuddly soft natured girl who rarely leaves my side. If I go to the loo, she follows me, if I go into the kitchen to make a cup of tea, she follows me. She will quite happily climb on my lap whilst I'm watching the TV, but she's a bit big for that! She is quite submissive and lets you do anything so bathtime and brushing are no problem. I've been unable to teach her any tricks, like giving a paw on command, no matter how hard I try. She just doesn't get it. But I love her anyway!

Kona, came in November 2017 and turned up at the shelter as I was waiting for Blondie to be put on the happy bus. Kona has lived with people, she loves squeaky toys, is excellent on the lead and her recall is great. She is a typical large boned lumbering Lab with 2 speeds. Slow and slower! When she arrived she wouldn't go in the house and it took a few hours before I could coax her in with help from Blondie. They had met before and get on really well. Kona is super bright, instinctively seems to know what I'm asking of her and picks up tricks easily. She's a nibbler and will give you playful micro bites sort of love bites!  My Mum is 91 years old and Kona seems to be drawn to her so I guess the previous people she lived with may have been older.

Lindy, came to me in February 2018 as a foster. Due to an adopter not being able to go through with her adoption I have made her a permanent family member. A nervous slightly defensively aggressive girl that is like the Duracell bunny she has loads of energy. She was also extremely curious about what was outside of our garden and was quite clever in attempting to lift/pull/dig under the fencing which I have had to reinforce to make Lindy proof! She was also a massive barker, barking at anything and everything which I've now managed to get under control. Slowly she got used to the other dogs and is now a very affectionate loving girl who really likes a fuss and cuddles. She's a licker, and will constantly lick any part of you she can get to! Also she is quite talkative especially in the mornings when she feels it's time to get out of bed! She is very bright but has no manners and will barge past anyone in her way. She's also a skilled thief and will steal food from any work surface, or plate that she can.

Faith, came in May 2018 as a foster from being in the shelter for a very long time. Partially shut down she was a quiet nervous girl and very hesitant about doing anything with us. She didn't like cuddles and would growl, but was ok with petting. She was also very hesitant in eating her food and needed a lot of encouragement to step forward and start eating, and when she did she was slow. Very slow, actually chewing and crunching each mouthful. The other 3 dogs who basically vacuum their food up have had to get used to waiting until Faith has finished before they get any after dinner chews. Faith is good on the lead but hangs at the back. After close to a year with me she will now allow cuddles and enjoys them, she will play and mock fight and gets along with the other dogs and if given the chance will steal their chews. She's still a bit nervous so I've not attempted to teach her any tricks or commands but her recall is good. I expect she will soon become a permanent family member. 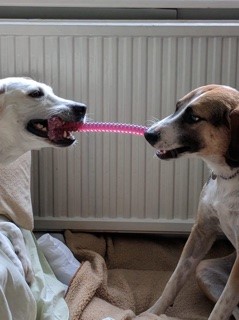 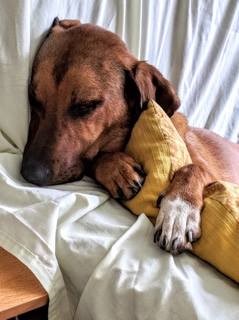 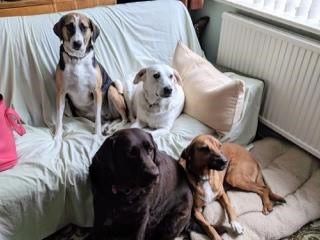 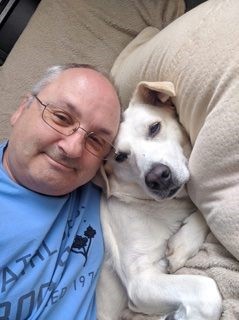